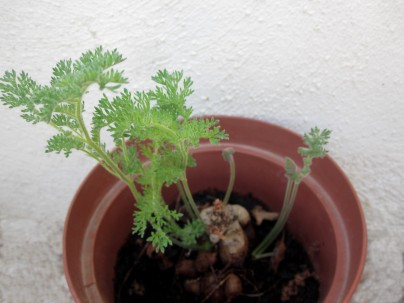 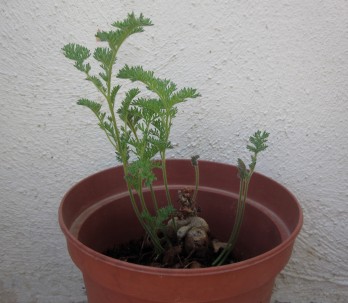 Pelargonium triste now has new growth after being dormant through most of the Summer.
P. triste is a Summer deciduous tuberous plant with light green carrot like leaves and  has yellow flowers which only open at night.
This plant was the first recorded pelargonium to be taken Europe, to the botanical gardens of Leiden by the VOC and could withstand long voyages by ship.

Scented pelargonium leaves can be used in cooking, baking, beverages,flavouring and also in icecream,meringues,liqueur, jellies and more.
Rubbing the leaves brings out the scented fragrance before it is used for your ingredients.
The flowers and leaves are edible and can be placed on top of
cakes & desserts,
Mint,Lemon & Rose scented leaves are the most popular in food flavouring but there are many more aromas to choose from.
Chopped leaves can be added to cakes,custard,milk pudding, sweet sauces and sorbet for flavouring.
They can also be used to add flavour to tea/iced tea or homemade lemonade or smoothes.

Many Pelargonium species can look beautiful in a hanging basket especially the slightly trailing types such as the Pelargonium peltatum shown in the picture. Smaller pelargoniums can also be planted together in one basket to add colour to the garden and the scented varieties release lovely fragrances.
Pelargoniums ideal for hanging baskets include: P. capitatum (rose), P. grossularioides (fruit), P. mollicomum (pineapple), P. crispum (lemon), P. peltatum, P. tomentosum (mint), P. exsitipulatum among others.

Pelargonium pelatum has beautiful pale pink slightly crinkled flowers with fleshy ivy shaped leaves,
This plant grows well in hanging baskets or on a pot on a table outside in summer.
These plants are now flowering well here in Crete and like to grow in sunny areas.

Pelargonium acraeum is growing well after germinating in the Autumn, it is still quite small and another new leaf is developing.
P. acraeum when fully grown has kidney shaped leaves & pretty white to pale pink flowers with darker markings which flowers over a long period of the year,
We also have many new seedlings that have germinated this spring.

Pelargonium graveolens meaning strong smelling in Latin was grown from seed last year and is now flowering, it has strong minty rose triangular deeply incised scented leaves and pale pink flowers. The scented leaves are used in food and beverages and is native to the Limpopo province and in parts of the Western Cape. 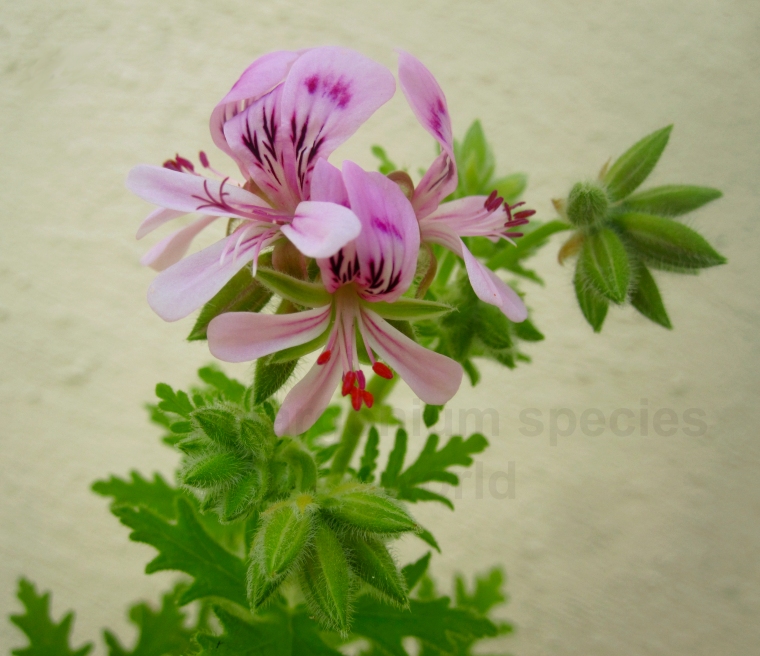 Pelargonium panduriforme (fiddle leaf pelargonium) has now started to flower, it is an upright shrub that grows to about 200 cm in height with strong tropical fruit/spicy balsam scented leaves and large pink flowers, Native to the Eastern Cape.

A greater percentage of native Pelargonium species are found in South Africa.

Most of which are on the south west corner of south Africa, a region which has some rainfall during the winter months.

P. Inodorum is native to New Zealand and Australia,it has pale pink flowers which grows in woodland and in forests.

P. Grossularioides is an aromatic herb with coconut scented leaves found in Tristan da Cunha and South Africa ( a few have also been found in India, Australia and also Syria). It has light pink to purple flowers and gooseberry colour stems.

P. Endlicherianum has large pink/purple flowers and grows in mountainous regions in south west Turkey, some have also been found in Syria and Iran.

P. Quercetorum are very tall plants with large pink flowers which grow in turkey and Iran.

P. Cayae is a native to South East Madagascar and has large heart shaped leaves and pink flowers.

More information and seeds at www.pelargoniumspeciesworld.com

The Pelargonium species comprises of about 200 or more perennials, succulents and shrubs.

The Pelargonium species are equally as appealing as their cultivated varieties, zonals, regals and ivy leafed and can be captivating and intriguing plants. They are reasonably easy to grow and rarely have any problems with pests and diseases.

They have become more admired over the centuries because of their delightful perfumed flowers and aromatic scented leaves.They have also gained popularity in the production of aromatic oils and also medicinal properties.

Pelargoniums are generally known as Geraniums but were later classed as two individual groups in 1789 by Charles L Heritier. The word pelargonium is derived from t
he Greek word “pelargos

” meaning stork because the seed head resembles that of a stork.

The first known pelargoniums to be cultivated in Europe was the P.triste, a tuberous rooted plant which could withstand long voyages by ship.

Thousands of cultivated varieties of pelargoniums selected for their desirable characteristics, were originally from a few native species which may still exist in South Africa to this day.

Pelargonium Species World is a Mother and Daughter family business which specializes in Species Pelargoniums situated in a mountainous area of Crete, Greece with the natural beauty of the fauna and Flora.

We are working together with nature and wildlife, all our plants are grown naturally in a natural environment with no chemicals, pesticides or fungicides.

All our seeds are fresh and are carefully picked by hand.  Please visit my website at www.pelargoniumspeciesworld.com